Armed police were called to catch a tiger in the Kent countryside – only to discover it was a sculpture.

Police sent a armed response unit following reports from terrified locals claiming a Tiger was stalking the village of Ightham, near Sevenoaks.

But they were surprised when it turned out to be a life-size sculpture made from resin by a sculptor called Juliet Simpson.

The 85 year old women told the Guardian: There were armed police on the hill leading up to my house. Ten of them!

Kent police confirmed they were called to Mote Road in Ightham at 10.23am on Saturday morning after a report from a member of public who had seen “a large wild cat”.

“By then I could see the helicopter above, and I thought ‘Goodness me.’

“So then I walked up the road and saw the police. I went up and said: ‘Do you want to be introduced to this tiger?”

The sculpture – made 20 years ago – lies next to a public footpath about 30 metres away from Ms Simpson’s house.

A spokesperson said: “Officers, including armed officers, attended as a precaution and, following a search of the area, have established there was no animal and no risk to the public. 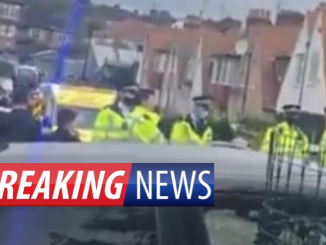