A farmer got his revenge on a fly-tipper who dumped 421 tyres on his land, by depositing them back on his doorstep.

The rubbish had been abandoned on Stuart Baldwin’s farm in Wigan but the act was caught on CCTV.

Farmer Stuart was so fed-up after being targeted 25 times he decided to turn detective and tracked him down to his nearby home, giving him three days to clean up the mess.

But when the deadline passed without any action, the dad used one of the trucks from the family’s recycling business to to give them back.

Video posted online show them being deposited at the home of the tipper.

Stuart said: ‘Revenge is best served cold isn’t it? I got sick of it so I thought I would do a bit back.

My daughter put a picture up on Facebook and we tracked him down.

‘He came down and he said he was going to move them so I gave him the benefit of the doubt and a couple of days breathing – but he never moved them.

‘I thought he must have forgot so I took them back to remind him. 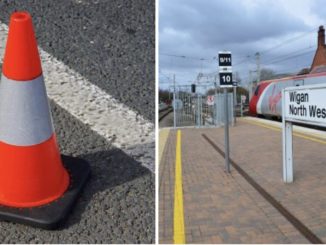