The disgruntled homeowner in Hounslow, west London, threw heaps of rubbish over the fence and into his neighbour’s garden – claiming it was an act of revenge.

Cliff Hamilton threw the rubbish back over the wall, claiming the mess could only have come from his neighbour.

Mr Hamilton claims he traced the junk piling up in his yard back to his neighbour in Hounslow, West London, following an anonymous tip about the fly-tipping scourge.

He told the Mail Online he had purchased the overgrown plot nine months ago, and had locked and bolted the spot and secured it with tall fences.

Mr Hamilton accused his neighbour of being behind the rubbish eye-sore at his Bath Rd plot – claiming it could not have come from anywhere else.

“None of the overgrown plot was trampled down,’ he said. “I was sent photos of the neighbours in my garden treading down the rubbish”.

On August 14 he and builders went to the plot, and were filmed hurling the junk over the brick wall back into the neighbours’ yard.

Footage captured the moments the group began chucking the rubbish back over the dividing wall.

In the footage, a woman in the neighbouring property can be seen and hear shouting: “What are you doing!”

Mr Hamilton tells her: “We’re giving you back everything that you put over our wall.”

A man then emerges to join the woman, and he shouts at the crew as they continue piling the rubbish back over the wall. 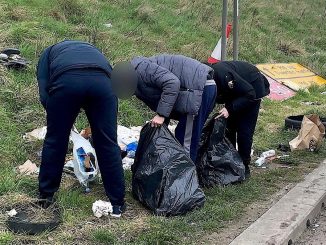