A furious driver has been filmed ripping signs out of the hands of climate protesters as they caused traffic chaos this morning.

The protesters from Insulate Britain arrived at junction 3 of the M4, known as Cranford Parkway Interchange, on Friday morning. A separate group blocked junction 1 of the M1, at Staples Corner.

Around 13 members of the group stepped onto the M4 and blocked traffic, demanding urgent action on climate change.

One person was seen gluing themselves to the road, with four police officers on the scene within 15 minutes.

One furious driver, who was held up in the queues heading towards London, was seen ripping the group’s blue, red and white signs out of their hands and drove off with them.

Other drivers clapped and cheered as the heroic brit jumped out of his car and took the signs from the protesters.

A video was later uploaded to social media which received thousands of views.

One person wrote: ‘’It’s about time someone took matters into their own hands.’’

Another person said: ‘’Well done to that driver, I can see more drivers taking things into their own hands if these protest carrie on.’’ 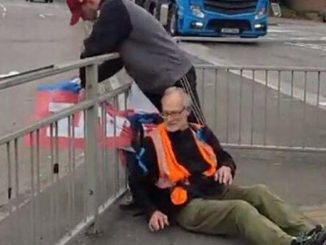 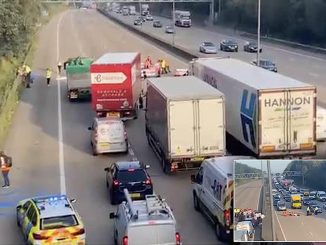