Ever since the last episode of hit sitcom Gavin and Stacey aired in 2010, fans have been desperate for a comeback – and the good news is, this year’s Christmas special might not be a one off.

Ruth Jones, who co-created the BBC show with James Corden and also stars in it as Stacey’s best mate Nessa, has admitted that she won’t rule out writing more episodes of the romance between a boy from Billericay and a girl from Barry.

Talking to Red magazine, which she features on the cover of, Jones said: “We’ve (Jones and Corden) always said ‘Do you think we’ll do another one?’ Sometimes we would just text each other and go, ‘I have a really good idea for Bryn’. “

She went on: “We will never again have the effect that we’ve had this time around, having said for 10 years that we’re not doing any more and then announcing something special.

“I think it would be churlish of me to say there won’t be any more. The honest truth is there are no plans, but I don’t think I could ever say never.” 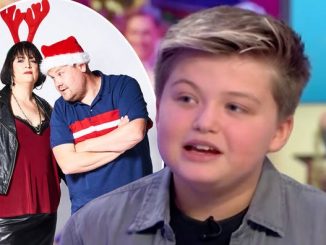 James Corden tells Gavin & Stacey cast there could be a series four!