The Duke and Duchess of Sussex have reportedly told the Queen they will not spend son Archie’s first Christmas with the monarch at her country estate in Norfolk.

Prince Harry and his wife are undecided what to do for Christmas, but have chosen to spend it away from other Royals at the traditional get-together, The Sun reported this morning.

Royal watchers fear the move could worsen tensions between the couple and the rest of the Royal Family, following recent from comments from Harry that he and his brother were ‘on different paths at the moment.’

The Sussexes, who will be taking a six-week break after Sunday when Harry, 35, attends a Royal Albert Hall event, will likely travel to the US and spend Thanksgiving with Doria, 63.

It had been thought they would return to Sandringham for Christmas but they informed Her Majesty, 93, that they will not be joining her and Prince Philip, 98 this year.

Harry’s plans emerged this morning after a royal source said: ‘They need some time away to recharge and decide their plans for next year.’ 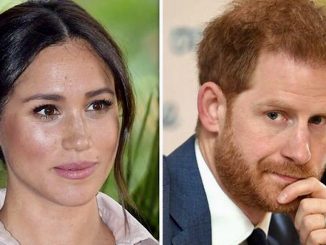