Fire crews are tackling a wildfire in Surrey which is larger than 40 hectares and has spread to a nearby golf course.

Play at the Rose Ladies Series Grand Final had to be halted after a blaze which began on Chobham Common spread to Wentworth golf course.

Surrey Fire and Rescue Service said it sent 10 fire engines, two water carriers and 10 other vehicles to tackle this afternoon.

The blaze could be seen for miles around including from tall buildings in central London.

It comes as Friday was declared the hottest August day in 17 years, with temperatures reaching 36.5C. 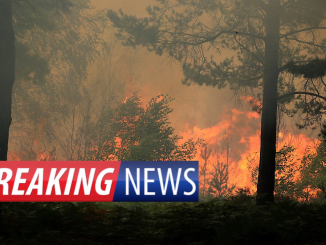