A furious driver ties an Insulate Britain protester to a railing with his own banner.

The driver is thought to have become angry after eco protester refused to move from the path of cars on a main road.

He yells: “Why aren’t you at work? Why are you stopping people from working?”

A fellow driver adds: “My business is on its knees. We have masses of haulage problems in the UK.”

A lorry driver was also captured heading directly into the demonstrators in a last-ditch attempt to get through.

Pedestrians and drivers eventually helped drag the troublemakers away from the busy road and tied him to a railing with his own banner. 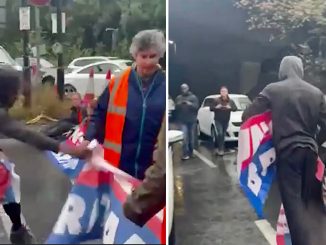