The Parents of British terrorist “Jihadi Jack” received £122,000 in legal aid before being convicted of sending him money, according to the Express.

While victims of terrorist activity in the UK, again and again, receive no state legal aid, and scant compensation.

John Letts, 58, and Sally Lane, 57, benefited from the payout prior to being convicted of supporting terrorism by sending £223 in cash in September 2015.

The pair were sentenced to 15 months’ imprisonment, suspended for 12 months. They had previously condemned the Government for leaving their son in a “legal black hole” by stripping him of his British citizenship after he decided to join up with Islamic State fighters in Syria in 2014.

A Judge at their trial described the pair as “two perfectly decent people in custody because of the love of their child”.

Last night critics described the pay award as “extraordinary” amid fears victims of terrorism in the UK and their families are being denied legal representation.

Victims’ rights campaigner Harry Fletcher said: “It is quite extraordinary that the state spent all this money on a show trial when the purpose of the money was almost certainly to help their son get home.

The final bill for the trial is set to rise further says the Ministry of Justice as only “partial costs” have been collected and “some bills have been received but not yet paid”. 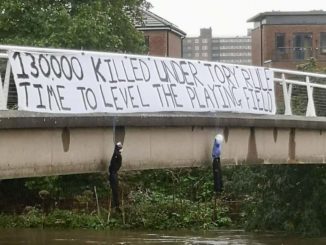