The announcement from NOAA, the National Oceanic and Atmospheric Administration, provided a clear preview of the future, and the latest warning sign that the planet continues to warm steadily from climate change, largely driven by the burning of fossil fuels such as coal, natural gas and gasoline, which trap heat in the atmosphere.

“It is virtually certain that we will have a ‘top five’ warmest year on record” by the end of the year, said Deke Arndt, chief of the monitoring section of NOAA’s National Centres for Environmental Information.

The global average temperature in July was 62.13 degrees Fahrenheit, which was 1.71 degrees higher than the 20th century average.

The previous global record was set in July, 2016, when temperatures were boosted by El Niño conditions in the Pacific Ocean. This July edged that record out by about .05 degrees Fahrenheit.

The 10 hottest years overall since 1880 all have occurred since 1998, according to NOAA and NASA.

While the heat globally was record-setting, the United States did not have its warmest month ever this July. The Lower 48 states ranked in the upper one-third of all July temperatures. But Alaska did experience the hottest month ever recorded, with temperatures averaging 58.1 degrees Fahrenheit — 5.4 degrees above average.

Wildfires raged all month in Alaska, and on July 4, Anchorage hit 90 degrees, the highest temperature ever recorded in that city. Warm ocean temperatures also have been disrupting wildlife there.


“In Western Alaska during the spring and early summer, we’ve had many reports of washed-up birds, seals and walruses that have appear to have been malnourished,” said Rick Thoman, a scientist with the Alaska Centre for Climate Assessment and Policy in Fairbanks.  “All across the state there have been many reports of dead, non-spawned salmon, in some places in significant numbers, and these have been associated with very warm river temperatures.”

The searing heat in July made headlines across the world.

Europe suffered under a sizzling heat wave in late July, with France, Germany, Belgium and the Netherlands setting all-time heat records. Paris hit 108 degrees on July 25, with at least five deaths blamed on the miserable conditions. Throughout Europe, local residents and tourists flocked to public fountains, electric fans sold out in stores, and rail service was cancelled over fears of warped tracks.

“This sadly is exactly what we expect from climate change,” said Dan Kammen, a Harvard-trained physicist and professor of energy at UC Berkeley. “Scientists have been predicting this for nearly 20 years. We are seeing the tough times get tougher and they are only going to get tougher as we go forward.”

Climate change does not cause heat waves, scientists say. Rather, it makes them longer and hotter than they otherwise would have been.

July’s record temperatures were not just confined to Europe. The heat triggered enormous levels of melting ice in Greenland. Roughly half the Greenland ice sheet experienced some melting in July, with raging rivers of water pouring off into the ocean and large lakes forming on its surface as temperatures in the normally frozen country neared 70 degrees.

On Aug. 1, Greenland, which normally experiences some melting in July, saw its largest loss of ice since records first began in 1950, with 12.5 billion tons melting in one day, according to scientists at the National Snow and Ice Data Centre in Colorado.

On the other side of the world, wildfires in Siberia burned 7.4 million acres in July — an area four times larger than all the fires that burned last year in California combined. The blazes, which are still being fought by the Russian military in remote forests, sent smoke over hundreds of towns and cities, drifting as far as Canada and Alaska.

The previous month was the hottest June ever recorded back to 1880, NOAA reported last month.

The average global temperature in June was 1.71 degrees Fahrenheit above the 20th-century average of 59.9 degrees.

Thursday’s announcement came as part of a monthly report put out by NOAA explaining temperatures and precipitation in the U.S. and around the world. The agency is part of the Trump administration. It mirrored the findings of European and Japanese scientists who have put out similar reports in recent days.

President Trump, however, has denied the broad scientific consensus that the Earth’s warming is mostly caused by human emissions. In the past, he has referred to climate change as a “hoax” created by the Chinese.

In 2017, he promised to pull the United States out of the Paris Climate Agreement, which was negotiated by 195 countries in 2015. The accord involves voluntary commitments by countries to reduce fossil fuel use, expand renewable energy and electric cars and other steps.

The agreement aims to keep warming below 2 degrees Celsius — or 3.6 degrees Fahrenheit —  the temperature at which scientists say the Earth is at risk of dangerous sea-level rise, widespread crop failure, and the collapse of many coral reefs. So far, the world is on pace to miss that target. At the current rate of emissions, temperatures are expected to increase by about 6 degrees Fahrenheit by the end of this century.

“We are still at a level where humanity can adapt,” said Hal Harvey, in a recent interview with this newspaper. But he added: “We need to do most of the right things very promptly in order to avoid runaway change.”

To that end, California continues to reduce its emissions.

A report out this week from the California Air Resources board showed that in 2017, 52 percent of the electricity consumed in California came from solar, wind, hydropower, nuclear and other carbon-free sources. During that year, California’s economy — the fifth-largest in the world — grew by 3.6 percent, which was 1.4 percent more than the national economy.

“California is proving that smart climate policies are good for our economy and good for the planet,” said California Gov. Gavin Newsom on Monday. “As the Trump Administration attempts to obliterate national climate protections, California will continue advancing the cause of American climate leadership.”

The report also showed that California has already met its 2020 targets for greenhouse gases under a law signed in 2006 by former Gov. Arnold Schwarzenegger, which called for the state to emit 1990 levels by 2020, a cut of about 15 percent.

Last year, former Gov. Jerry Brown signed a law requiring 60 percent of the state’s electricity to come from renewable sources by 2030 and 100 percent to be carbon-free by 2045. Other states, including New York, New Mexico and Colorado, have recently passed similar laws.

“The state by state story shows it can be done,” said Kammen. “Clean energy resources are everywhere. But that said, we have to ultimately work together as a nation. We can’t have 50 separate policies, and no national policy for the power grid.”

Kammen said he expects California in the next decade to phase out natural gas in all new homes and to ban the sale of new cars with internal combustion engines sometime after 2030, the way half a dozen European countries already have done.

“Even if the next election brings another president, it takes a while to restock these federal agencies and to do deals with other countries,” he said. “The last two years we have been moving backwards. It takes time to catch up. We’ve frittered away time when we should have been acting. Now we are going to have to make bigger steps.” 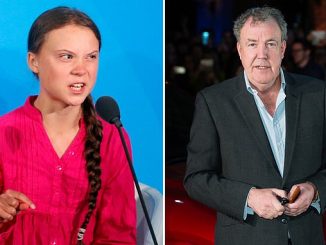 Jeremy Clarkson tells Greta Thunberg to shut up & go back to school!