Boris Johnson could face a vote of confidence in his Government as early as next week as opposition parties join together to prevent a no-deal Brexit.

An interim government potentially led by Labour leader Jeremy Corbyn could then takeover and secure a further Brexit extension, according to a senior MP for the Scottish National Party.

Stewart Hosie said the controversial plan was the only way to guarantee the UK does not ‘crash out’ of the EU on October 31 without an arrangement.

Earlier this month, MPs forced through a law which compels Johnson to seek an extension to Brexit unless he agrees a deal by October 19 or secures Parliament’s approval to leave without an agreement.

But Mr Hosie, the former SNP deputy leader, told the BBC Radio 4 Today programme that MPs fear a no-confidence vote and temporary new government is the only way to ensure a no-deal.

He said: ‘We have to do that because there is now no confidence that the Prime Minister will obey the law and seek a further Brexit extension. 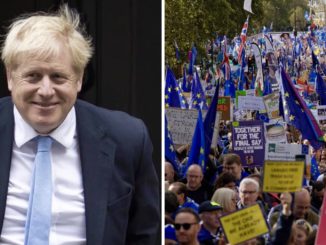