Eight dinghies dodged Border Force in a daring dash across the Channel on a record-breaking day which saw 300 migrants landing in the UK.

A total of 30 boats are believed to have made the crossing, the first setting off in the early hours of Wednesday, and the final head count could rise to 500 migrants.

Photos showed groups of migrants staggering up the sand before collapsing on the rocks, exhausted after the perilous journey.

The arrivals along the coast mean today’s crossings have shattered last month’s single-day record of 235 migrants who arrived in 17 vessels.

So far this year, at least 5,025 migrants have arrived in small boats – including a single-month record of 1,468 in August. 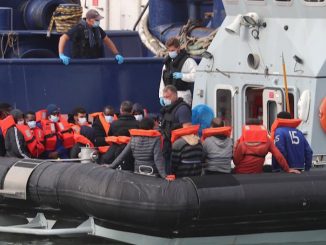