Remainers are writing ‘I love EU’ on 50p coins with permanent marker and releasing them back into circulation, in a last-ditch attempt to anger  Brexit voters.

Karen Hoyles, from Devon, posted pictures of her defaced coins online, calling for others to follow suit.

In an appeal to her Twitter followers, she hoped for people to ‘get their creative juices flowing’ and release ’10million’ 50ps with the phrase.

The protest comes as Royal Mint announced its release of a Brexit 50p coin.

Three million special edition coins will also be released into general circulation this morning, bearing the inscription ‘Peace, prosperity and friendship with all nations’.

Ms Hoyles wrote: ‘Come on, all you need is a permanent marker. 10million in circulation would get the message across quite nicely.’

After her message was liked more than 11,700 times, she commented: ‘Great response, it’s got people’s creative juices flowing if nothing else.

‘We can safely assume it’s unpopular with Brexiteers, and even some Remainers. You can’t please everyone, but more importantly it’s given some of us a way to protest, however small. We’re a democracy, right?’

‘By all means give to charity, “take out of circulation”, paint chisel or throw into the sea. It’s meant to suggest a small act of defiance, not an order.’ 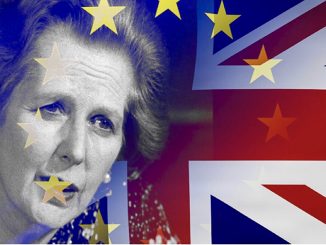