Shadow Foreign Secretary Emily Thornberry is on course to lose her seat, a private Labour party poll has revealed.

A senior Labour source said local internal polling conducted by the party found that Mr Corbyn’s chaotic Brexit policy has led the constituency’s voters to switch to the Lib Dems due to their unequivocal pledge to reverse the 2016 referendum result.

The insider said her constituency is now listed as one of the ‘at-risk’ seats in London.

It exposes the scale of opposition to Labour in the north London seat, where Ms Thornberry won 14,000 more seats than the Lib Dems in the 2017 General Election.

Ms Thornberry, one of Mr Corbyn’s closest allies and a constituency neighbour, was once firmly against holding a second Brexit referendum but switched to backing one 18 months ago.

Insiders said the U-turn came soon after polling in her constituency started to show the Lib Dems making ground.

And the Lib Dem policy to reverse Brexit without even having a second referendum by revoking Article 50 had consolidated the Remainer party’s position in the seat. 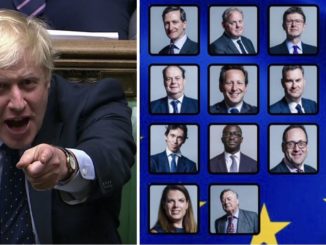