Brits were left dazzled after watching ‘silent lightning’ strike across the UK this week.

Some compared the surreal scenes to a ‘silent disco’, while others described it as ‘the weirdest storm I’ve ever seen’.

The bizarre storms which happened on Tuesday and Wednesday saw the country experience thousands of lightning strikes with temperatures soaring above 30C.

Another person wrote: “Witnessing the weirdest lightning storm I’ve ever seen in my life. No rain, no thunder. Just constant lightning that’s been going on for nearly an hour now.”

But even tho the lightning seemed to be silent, it actually wasn’t!

The explanation for the storms appearing to be silent could of been one of two reasons.

Firstly lightning doesn’t always make contact with the ground so there won’t be any sound in that case.

The storms could of been at a high altitude which is why you didn’t hear any thunder, as the sound would have dissipated before it could reach ground level.

If the storm was at a far distance, the sound would also have dissipated before it could reach you. Light travels faster and at a much greater distance than sound which is why you can still see the lightning. 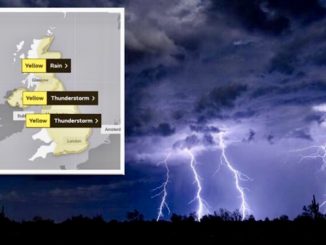