Snow and ice warnings have been issued for parts of the UK, bringing the risk of disruption to travel on Thursday morning!

The UK Met Office has issued a yellow weather warning for snow and ice for parts of northern England, the Midlands, north Wales, from 10pm until 10am on Thursday.

The warning also covers much of the Midlands, Central Southern England, East Anglia, and parts of Wales.

Whilst amounts are not expected to be considerable there is a risk of some heavy snowfall for a period of time with accumulations above 100-150m.

Wintery showers will move eastwards late Wednesday evening and during the early hours of Thursday.

In southern Wales 2-5 cm of snow is likely, mainly above 200 metres, whilst 1-3 cm snow is likely over the Cotswolds, Chilterns, and parts of the Midlands above 150 metres.

Rain may turn to sleet and snow for a time over parts of the Midlands, East Anglia and the northern Home Counties.

Accumulations at these low-levels will be mostly small, especially on roads, but a centimetre or so is possible in one or two places.

Rain, sleet and snow will quickly clear southeastwards by late morning and any snow at lower levels will soon thaw. 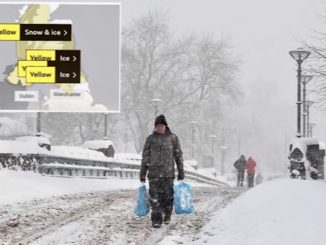