A two-day weather warning has been issued as Storm Ciara is expected to unleash hurricane force winds across the entire UK of up to 80mph-90mph this weekend.

The low-pressure system, currently developing in the North Atlantic, will bring strong winds and heavy rain,

The strongest gusts in exposed locations could reach 80mph-90mph.

Some locations on the coast of Scotland could even see wind speeds of up-to 100mph!

A yellow severe weather warning for wind has been issued which currently covers the entire UK and is in force from 6pm on Saturday evening and all day Sunday until midnight.

Storm Ciara is expected to bring disruption which may affect some power supplies and transport services across parts of the UK. 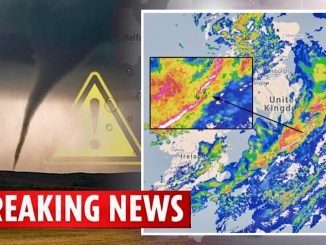 Danger to life Amber warning issued as Storm Ciara bares down on Britain!