From Glasgow to London and everywhere in-between. Thousands of Nurses along with many more supporters have protested across the country to demand a pay rise after the government refused to increase pay despite the incredible commitment they have shown in caring for those with Coronavirus.

Despite a raise announce for 900,000 public sector works some NHS staff were not awarded a rise. The government had said that Nurses were not included because they negotiated a separate three-year-deal in 2018. Junior doctors were also excluded because they agreed a new four year deal last year.

A recent survey by Unison suggested more than two-thirds (69%) of people think all NHS employees should be awarded a rise this year. The survey found that just one in 10 thinks health workers should wait until April for a rise. A Royal College of Nursing spokeswoman said they would be supporting the protests. She added: ‘The Government should listen to these dedicated professionals, hear their arguments and accept that there’s no alternative to a significant pay rise this year. Waiting until 2021 is unacceptable.’ 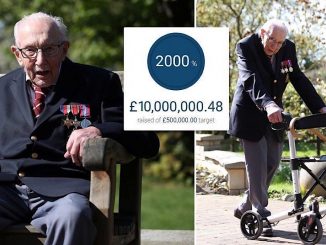 Man in his 50s dies from coronavirus in the UK